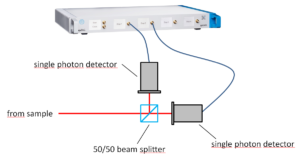 General layout for characterization of a single photon emitter.

The time differences between the two signals are measured continuously and are shown in a histogram (in ps resolution). This histogram shows the second-order correlation function which has typical forms for different types of light sources. A single photon emitter shows an antibunching effect while a thermal source is showing bunching effect. A coherent light source shows no correlation effects (i.e. the function is constant to 1).

The quTAG software allows the user to easily collect the data for the correlation function and allows fitting the appropiate function (for single photon emitter, thermal sources and three-level-systems) with one click. 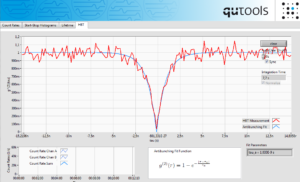