State of the art time-to-digital converter

The quTAG detects events with a digital resolution of 1 picosecond and a jitter down to 2.3 ps RMS. The trigger threshold is adjustable between -5V up to +3 V, including the widely used LVTTL or NIM. It allows capturing up to 100 million time tags per second and uses a USB 3.0 connection to transfer the extensive data.

It is delivered with software for Windows and Linux with an easy-to-use graphical user interface. It can also be integrated in custom software. Examples for LabView, C/C++ and Python are included.

The quTAG family expands with the two devices quTAG HR – High Resolution and quTAG MC – Multi Channel with a variety of variants and additional hardware and software features.

The SMA connectors on the front are the main inputs of electrical signals for the time tagging.
The start channel resets the device time to zero at each incoming pulse when active. That simplyfies calculating huge amounts of time tags e.g. at fluorescence time measurements.
The quTAG can be synchronized to an external clock to allow more precise long-term accuracy.
quTAGs can be synchronized to measure at the same time base. Therefore, the same clock has to be shared.

The two programmable outputs enable conditional measurements, state preparation, gating of detectors, control of shutters and more to synchronize events. An adjustable delay can be added on the output signal by software.

The device features marker inputs, inserting timestamps in the timeline. Marker inputs are needed e.g. to read a pixel or line clock in a FLIM setup.
All quTAGs can be controlled by USB 3.0 and ethernet connection to a PC.

The quTAG HR is designed for high resolution measurements with up to 16 channels. These time taggers of the quTAG family are available with a wide range of timing resolution and channel numbers. Enhanced timing jitter values can be achieved by interconnecting input channels via software.

The table below shows all quTAG HR variants with number of input channels and varying timing RMS jitter by interconnectiong channels in picoseconds. 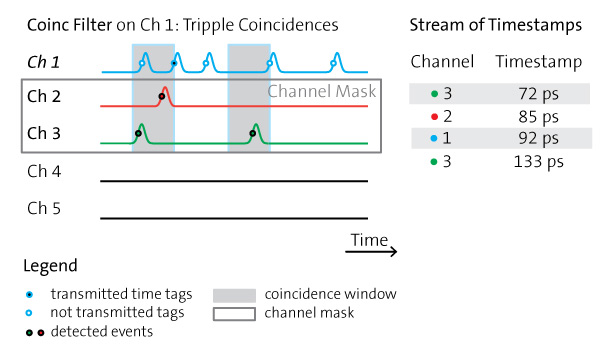 The device features marker inputs, inserting timestamps in the timeline. Marker inputs are needed e.g. to read a pixel or line clock in a FLIM setup.
+ Divider for stop channels
This option allows you to enable the divider on all stop channels. This allows higher frequency periodic signals to be recorded.
+ Output channels

The quTAG MC is designed for a high number of simultaneous measurements with up to 32 channels in one device and the ability of synchronizing multiple devices.

These time taggers of the quTAG family are available with a wide range of channel numbers and timing resolution. Enhanced timing jitter values can be achieved by interconnecting input channels via software.

The table below shows all quTAG MC variants with number of input channels and varying timing RMS jitter by interconnectiong channels in picoseconds.

The device features marker inputs, inserting timestamps in the timeline. Marker inputs are needed e.g. to read a pixel or line clock in a FLIM setup.
+ Output channels – optional

In order to measure the jitter, we generate an electrical pulse with steep edges. This pulse gets split into two by a power splitter and sent into two different inputs of the quTAG (i.e. start and stop-X or stop-X and stop-Y).

Then we use the quTAG software to generate a startstop-histogram. We fit a Gaussian function to this histogram and determine RMS and FWHM. The single channel jitter corresponds to σ / √2 from this two-channel measurement, assuming equal Gaussian contributions from both signals. The FWHM can be obtained by the standard deviation with the relation FWHM = 2 √2 ln 2 σ ≈ 2.35 σ. 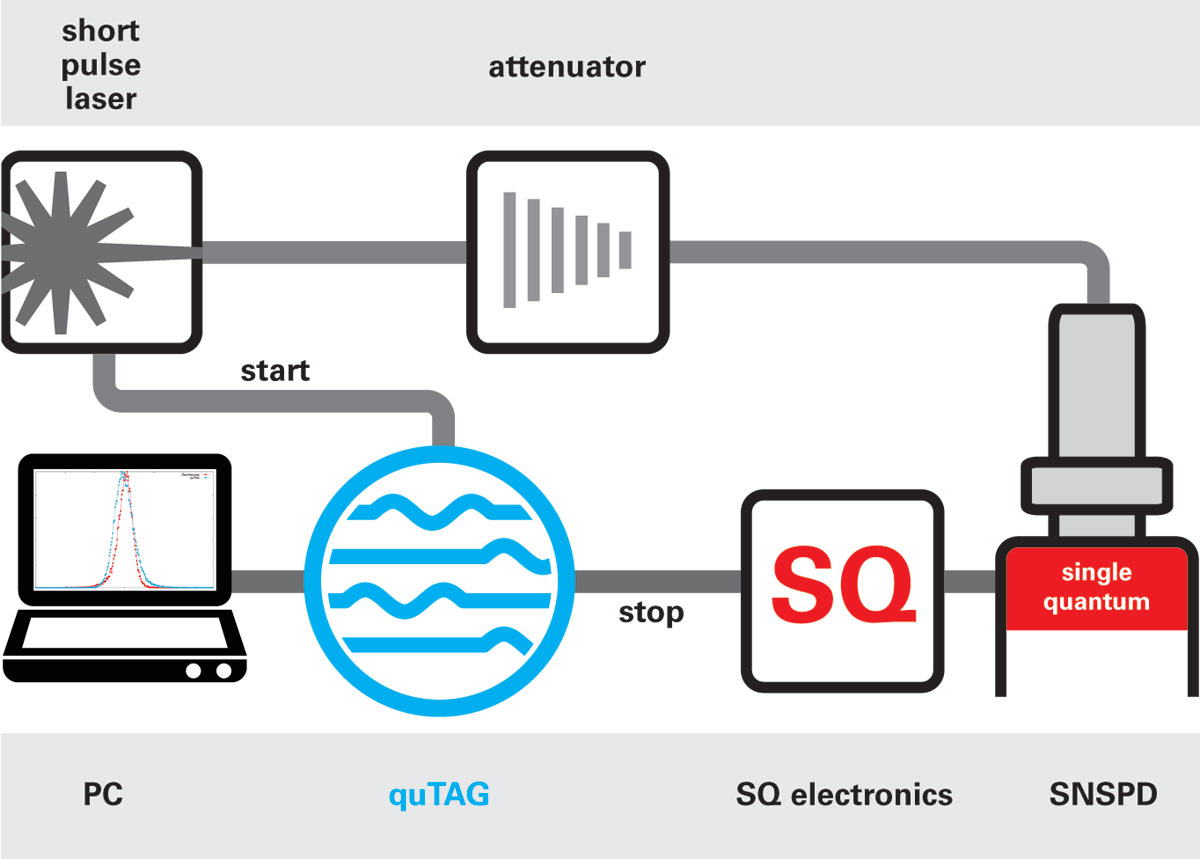 We measured a time difference histogram between the trigger pulse from the laser as start and the SQ detector signal as stop.
This is basically the setup for a Fluorescence Lifetime Imaging (FLIM) measurement.. 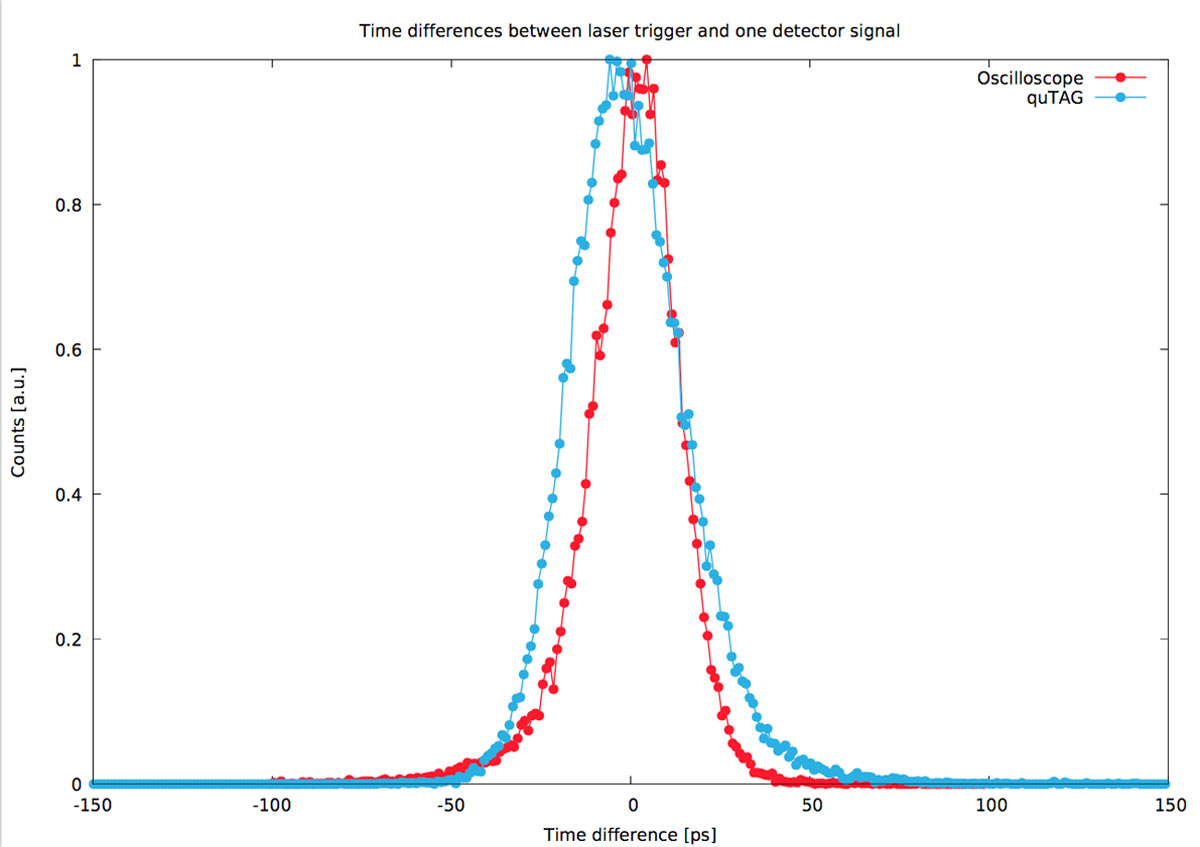 One SQ Detector as Start, another one as Stop 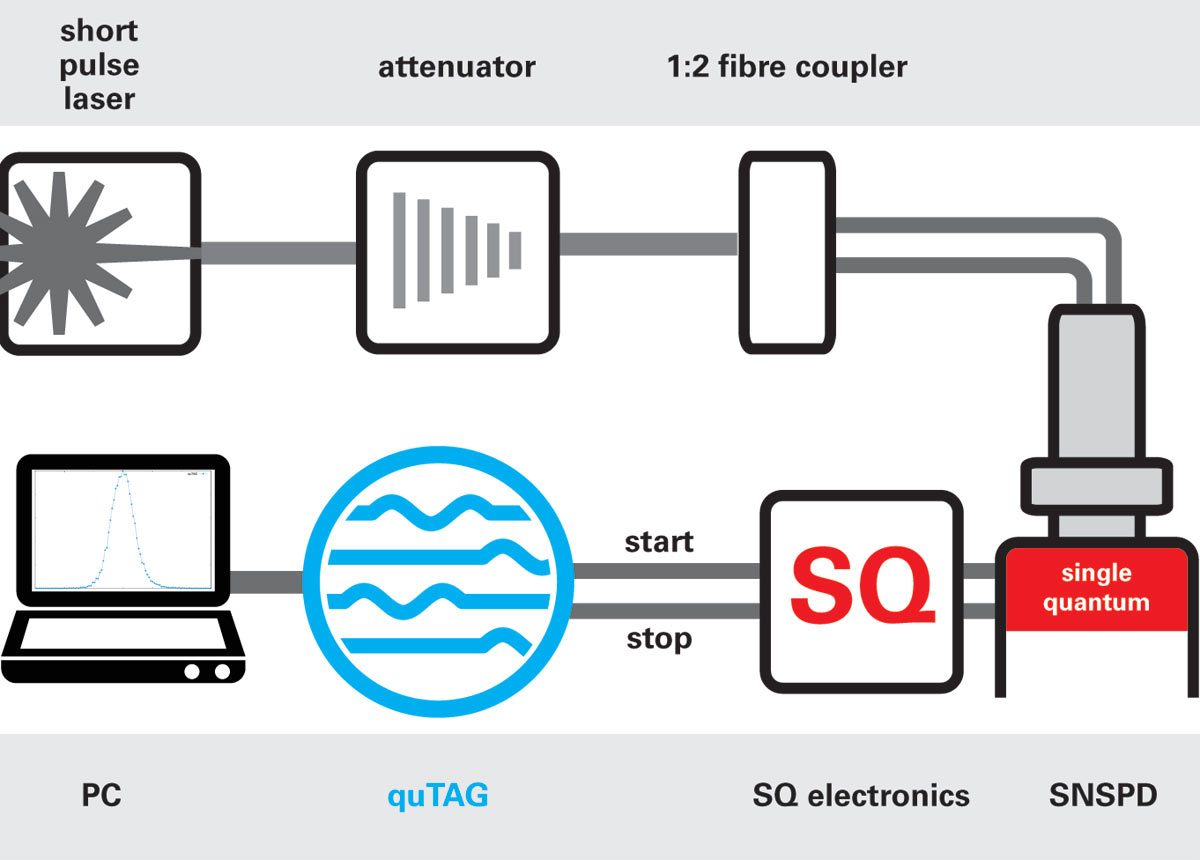 Here, we measured the time difference histogram between one of the two SQ SNSPDs as Start and the other one as Stop pulse. 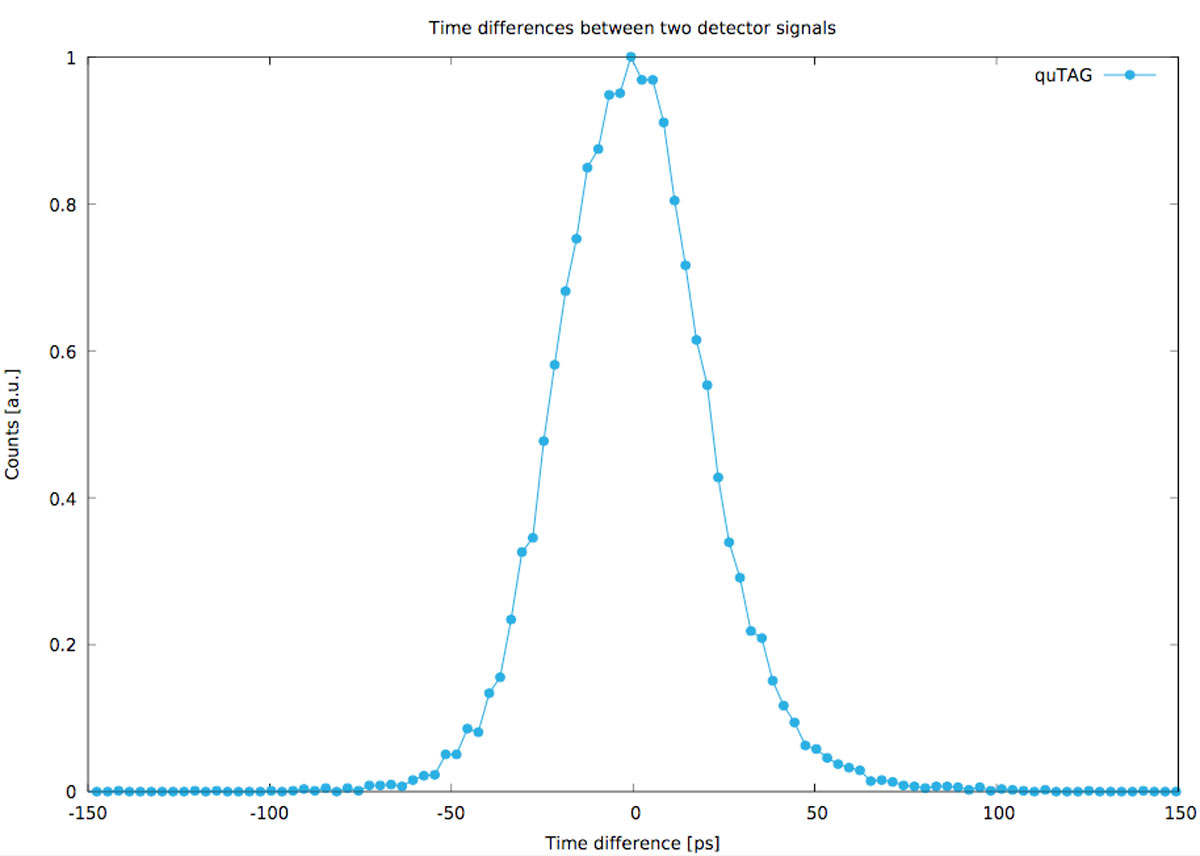 Python is a popular coding language for labs and institutes. Therefore, qutools created a Python file to wrap all the DLL or SO (Win/Linux) functions to gain quick and easy control of the hardware.

The following list shows the different examples using this wrapper. An explanation is added to each code.

The following codes show how to quickly connect to the quTAG via Python. The quTAG.py file wraps all DLL functions to get simple access via your own code.

In the first example qutag-GetCoincCounter-starter_example.py we are retrieving countrates and coincidences of the quTAG and its input channels.