How do we show the particle nature of Photons? The obvious way seems to be, take a single photon and show that it cannot split up:

We use a beam splitter and single photon detectors at each output and check whether we see a detection event at the same time in both outputs. 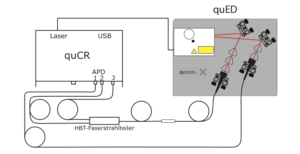 In this case, we look at two-fold coincidences between the trigger and the detectors after the beam splitter. These are the (heralded) single photon events.

If the photon could split up (or if we did not have heralded single photons), we would see a lot of 3-fold coincidences between the trigger and both detectors after the beam splitter. This is not the case: 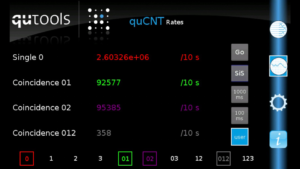 Why are there still some three-fold coincidences? Do you have an explanation? Is our assumption incorrect? Or is it what experimental physicists call “experimental imperfections”?

Do you know how to characterize the “quality” of a heralded single photon source? How many 2- or 3-fold coincidences would we expect from “classical” light? Is there a way to test that experimentally?